This week marks the 50th anniversary of the historic deadly flooding caused by Hurricane Agnes and its remnants in June 1972 across the eastern United States, including the hardest hit states of Pennsylvania and New York.

Agnes was one of the largest June hurricanes to ever cross the Atlantic Basin. According to the National Hurricane Center, its circulation extended over about 1,150 miles in diameter.

The origins of the storm can be traced back to Mexico and the Caribbean.

A large disturbance was first detected over Mexico’s Yucatán Peninsula on June 14, 1972. This system drifted east and organized into a tropical depression later that day after emerging northwest of the Caribbean Sea.

The newly formed tropical storm tracked north on June 17 and continued to intensify. Agnes has become a Category 1 hurricane over the southeastern Gulf of Mexico on June 18 when NOAA reconnaissance aircraft detected sustained winds of 85 mph.

Hurricane Agnes continued to track north, sending it toward the Florida panhandle, where it made landfall on June 19 with maximum sustained winds of 75 mphbarely at Category 1 strength. According to the NHC, the highest reported gust of wind on land was 55 mph in Apalachicola, Florida.

Agnes turned northeast after making landfall and quickly weakened into a tropical depression over Georgia on June 20. 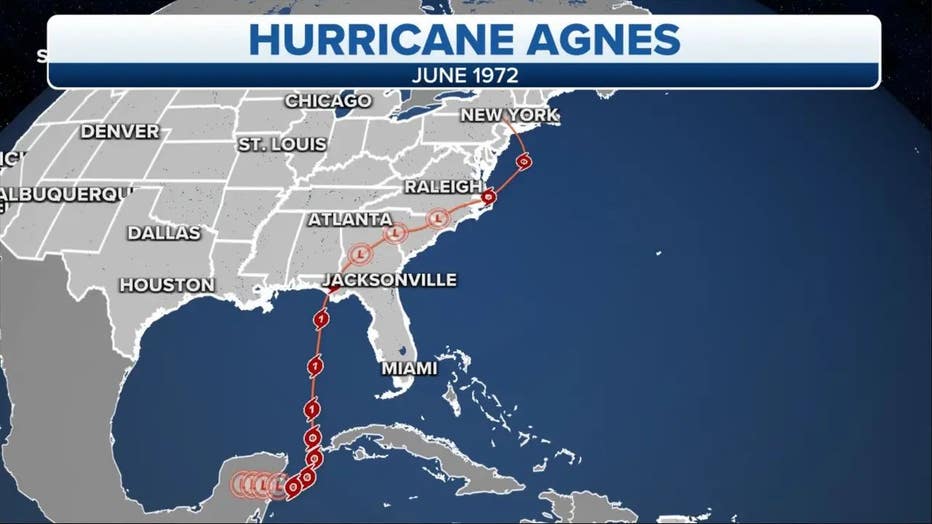 However, after Agnes merged with a secondary non-tropical low pressure system to the west, it was able to regain tropical storm strength over eastern North Carolina. June 21st. The center of the storm moved offshore near Norfolk, Va. that evening, and it continued to gain strength over the western Atlantic Ocean.

Agnes then turned northwest and was on a collision course with the northeast and mid-Atlantic coasts, setting the stage for torrential rains that would bring historic flooding to the eastern United States in course of the next few days.

Agnes Main Circulation Center dissipated in Connecticut that nightthe secondary low-pressure system then taking over as the dominant circulation as it moved northeastern Pennsylvania.

These remnants of Agnes stalled on the area and continued to flood the eastern United States until June 25.

The worst impacts were felt in the Northeast and Mid-Atlantic states, where widespread rainfall totals above 10 inches were recorded from northern Virginia to New York’s Finger Lakes. Localized areas captured 14 to 19 inches of rain.

According to the NOAA Weather Prediction Center, the highest total of 19 inches was measured in western Schuylkill County in the eastern Pennsylvania coalfield.

Some of the heaviest flooding was seen along the Susquehanna River in Elmira, New York, and Wilkes-Barre, Pennsylvania.

In Elmira, 20,000 people had to evacuate their homes as the river overflowed its banks and flooded the city, according to the University of Rhode Island. When this water rushed downstream, the flooding caused a levee to burst at Wilkes-Barre, resulting in the near destruction of the whole cityThe University of Rhode Island also noted that the rising Susquehanna River flooded Pennsylvania’s capital, Harrisburg, where the governor’s mansion was located. submerged by flood waters.

“It is difficult, if not impossible, to determine how much precipitation could have occurred separately from the baroclinic system if Agnes had not been located to the east,” the NHC wrote in its tropical cyclone report for Hurricane Agnes. “Regardless of the energy sources and circulation dynamics that caused the flooding, however, this devastation could not have occurred had it not been for the extreme moisture imports into the region by the depression that had been Hurricane Agnes. .”

Agnes and her remains were responsible for 122 deaths113 of which were associated with flooding in the eastern United States. The other nine deaths were caused by severe thunderstorms and tornadoes sired by Agnes in Florida. Seven additional deaths have also been attributed to Agnès in western Cuba.

Agnes was responsible for $2.1 billion in damage in the United States, primarily due to historic flooding.

At the time, Agnès was the costliest natural disaster on recordfar exceeding the combined losses from Hurricane Betsy in 1965 and Hurricane Camille in 1969, which had previously been the nation’s two most destructive storms, according to the NHC.

It’s no surprise that the World Meteorological Organization voted to remove the name “Agnes” from being used again for any future tropical storm or hurricane in the Atlantic Basin, joining a list of 94 retirees in total until 2021.

GET UPDATES ON THIS STORY AT FOXWEATHER.COM