More than six months after the devastating volcanic eruption and tsunami in Tonga, survivors of a destroyed village on one of the archipelago’s islands are optimistic about the future as they await relocation to temporary shelter in the capital Nuku’alofa.

The January 15 eruption of the Hunga-Tonga-Hunga-Ha’apai submarine volcano, one of the largest eruptions on record in the modern era, sent tsunami waves across the Pacific, killing three and thousands displaced in Tonga, as well as extensive damage to infrastructure and disruption of water supply and communication networks.

Kalisi Levani (L) and Tipiloma Tutu’ila, survivors of the volcanic eruption and tsunami that hit Tonga on January 15, 2022, sit in a temporary shelter in Nuku’alofa, Tonga on July 13. (Photo courtesy of Katalina Tohi) (Kyodo)

As Tonga still restricts the entry of foreigners, including journalists, a local reporter on behalf of Kyodo News interviewed survivors from Mango, one of the islands closest to the volcano, at a parish hall in Nuku’ alofa on the island of Tongatapu, where they were evacuated. .

“That afternoon, I was at home weaving. Somehow it was a strange day. I looked up at the sky that afternoon and could tell from the color of the sky (which) was dark gray that something was wrong. said Levani, Mango’s oldest resident.

Less than five minutes after the first explosion, Levani saw huge waves approaching his village as everyone ran to higher ground to escape the tsunami, where the 62 survivors stayed for two days.

“On Monday (January 17), we went down to the village. Everything was gone…the tsunami took everything away,” she said. “We couldn’t figure out where our houses were. There was sand everywhere.”

Another evacuee, Tipiloma Tutu’ila, 53, a mother of eight who lost her 65-year-old husband Telai Tutu’ila, said the disaster still gave her nightmares.

“I tried as much as possible to forget what happened, but January 15, 2022 keeps coming back to me. It was the saddest day of my life,” said Tutu’ila, whose husband was the only dead among the inhabitants of the island. 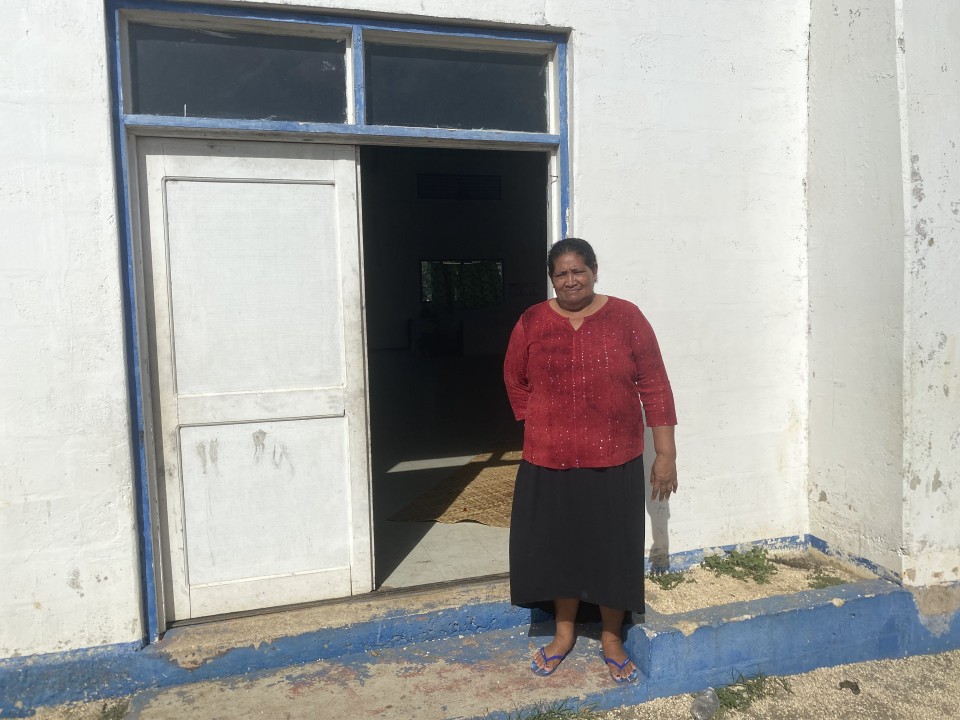 Tipiloma Tutu’ila, a survivor of the volcanic eruption and tsunami that hit Tonga on January 15, 2022, stands outside a hall at the Wesleyan Free Church of Tonga in Nuku’alofa on July 15. Tutu’ila and other evacuees from Mango Island are temporarily living in the church in the Tongan capital. (Photo courtesy of Katalina Tohi)(Kyodo)

Tongan Prime Minister Hu’akavameiliku announced in May that the Mango Islanders would be relocated to ‘Eua, a hilly island southeast of Tongatapu. As part of the government’s program to revive affected communities, the Ministry of Infrastructure is working with Mango Islanders and construction companies to build their new homes.

While some community members had wanted to return to Mango, Levani said everyone now accepts resettlement as the best option.

“The waves even washed away our cemetery and all of our loved ones who were buried there. You see what it’s good to go back to a place where only sadness remains,” she said.

An estimated 84% of Tonga’s population was affected by the disaster, according to the government. The total damage was assessed at $90.4 million by the World Bank.

But still, Tutu’ila looks forward to the day when the islanders move into their new homes on ‘Eua.

“Despite the fact that my children lost their father and I lost my husband, we try to make the best of it,” she said.