When the author first interviewed the late Charles R. Lowman in 2017, he said: “You know, I spent the better part of two years in the Army Air Corps during World War II, but I was on a ship the whole time and I wore overalls and a sailor hat.”

When Charles R. Lowman was drafted in 1943, he joined the US Army Air Corps. He did not expect to spend the next two years on a ship in the Pacific theater. As an airborne radar specialist, Lowman became a member of the top-secret Operation Ivory Soap [see the author’s column in the April 30 edition of The Andalusia Star-News]. The operation began right after the Allies defeated the Germans in North Africa at the end of 1943.

With few fixed aircraft repair facilities in the Pacific theater, the Army Air Corps realized it needed aircraft repair facilities that could move with the various invasions of he is. Once the plans of Operation Ivory soap were approved, six Liberty ships were modified at Brookley Field Army Air Force Base in Mobile, Alabama. They have been emptied and fitted out as Aircraft repair vessels. As part of the operation, 18 auxiliary vessels were converted into Aircraft maintenance vessels. Lowman and some 5,000 men from various military services were trained for five months at the big hotel in Point Clear, Alabama. The operation was so secret that most of the men involved did not know the full scope of Ivory Soap.

Charles Rowell Lowman was born in the Searight community, just north of Andalusia, Covington County, Alabama on April 25, 1923. His parents were Benjamin Edmond and Agnes Sturgis Lowman. Charles had two siblings, Georgia Lowman [Mathews] and Merle Lowman [Shreve]. He attended schools in the city of Andalusia and was part of the first promotion of the new Andalusian high school in May 1940. Charles was one of 21 young men selected to attend the University of Alabama under the Defense Training Act. In college, he studied radio and electronic technology for 21 weeks. Upon completion, he was posted to Brookley Field near Mobile for further training.

Charles Lowman aboard the SS Olds in his sailor’s clothes, 1945. [Photo: The Lowman family]

After training was completed at Brookley, Lowman was sent to the University of Florida where he studies the new radar which begins to be installed on board aircraft.

Airman Charles R. Lowman’s training took a different turn at this point. He would train with other airmen for the next five months at the Grand Hotel under Lt. Col. Mathew Thompson. Upon completion of their work at Point Clear, the men were assigned to the new Aircraft repair vessels. Charles joins the 1st Aircraft repair unit on board of SS Major General Robert Olds.

the Old traveled to Guantanamo Bay, Cuba, then through the Panama Canal to Hawaii, where they loaded supplies. After leaving Hawaii, the Old SS and the other ships of Operation Ivory Soap took part in invasions in Guam, Tinian, Iwo Jima, Okinawa and the Philippines. They helped keep the Pacific fleet of B-29 bombers and P-51 fighters airborne. Countless planes managed to join the fight after being quickly repaired by these airmen-turned-sailors. Each ship carried two large R-4B Sikorski Helicopters This first shipboard experience with helicopters fulfilled the essential role of locating downed aircraft and transporting injured pilots to field hospitals. They were also used to transport mechanics, electricians and other technicians, as well as spare parts, to remote islands when needed.

Charles recalls:We were lucky to never have been attacked, especially by suicide bombers. They sank many American ships in Okinawa. We were nearly sunk by a typhoon in late 1945.” Between seven and ten American and allied ships were sunk during this typhoon. Lowman recalled that the typhoon destroyed the interior of the Oldleaving most of his repair machinery ripped out and destroyed.

After the war ended, Charles returned to the United States and enrolled in the University of Alabama. He decided to transfer to Alabama Polytechnic Institute [now Auburn University] where he earned his bachelor’s degree in electrical engineering. While studying at Auburn, Charles worked summers at Alabama Electric Cooperative [AEC] as a lineman’s helper. After graduating, he returned to AEC full-time as a field engineer.

Charles Lowman worked there for the next 38 years until his retirement in 1988. For the last 18 of those 38 years he served as general manager. During this time, AEC has expanded and increased its production capacity. Charles also oversaw some of the most perilous times for AEC [now called PowerSouth]. In the most difficult times, he was always loved by his employees. 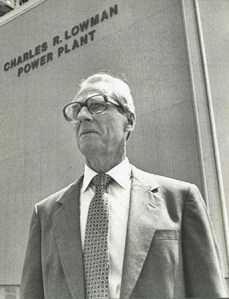 Charles Lowman standing next to the AEC power station that bears his name. [Photo: PowerSouth]

Earl McBryde, retired Head of administrative systemsmentioned, “Charles was one of the best people I’ve ever met and a solid leader.” The late John Howard, who had been vice president of Energy productionsaid Charles was known for his incredible memory. “In one meeting, as they were trying to recall information from a previous meeting, Charles reached into a desk drawer and pulled out a green notebook, and cited the decision.” Howard said, “I think a good part of Charles’s memory lay in that little green book.”

Larry Avery, retired Vice President of Engineering, Charles remembered as a masterful CEO, steering the AEC through some of its toughest times. Avery recalled, “Mr. Lowman was a quiet man but he always talked to you. He learned your name shortly after you started working there. Throughout the time when we were starting up next-gen units and finances were tight, he remained the same kind and considerate person…Lowman started as a field engineer and evidence of his work could be seen throughout the system. When I or any other young engineer made a technical comment around Mr. Lowman about our transmission, generation, or distribution system, we were very cautious. He was very familiar with the technical and administrative aspects of the operation of AEC.

A . G. Palmore, retired Vice President of Administration and Financerecalled, “Charles Lowman was the right person at the right time for AEC and the challenges it faced in the 1970s and 1980s. He was a good negotiator, cool-headed with a cool demeanor and always remained calm.

When Charles Lowman retired in 1988, the Tombigbee Power Station was renamed “The Charles Lowman Powerhouse” in honor of his 38 years of outstanding leadership at AEC. Charles published a book in 1991, “Power Pioneers – The First 50 Years of AEC.”

Charles Rowell Lowman died on January 10, 2018 at the age of 94. His funeral took place on January 14 with interment at the Andalusia Memorial Cemetery. He is survived by his wife of 65 years, Effie Adams Lowman; nora girls [Lloyd] Culp of Dozier, Alabama; and Ruth [Lance] Nail from McAllen, Texas; three grandchildren, a great-grandchild and numerous nieces and nephews. Effie Lowman died on January 1, 2021.

Author’s note: My father, Frank Vick, worked at the AEC when Charles Lowman was its general manager. He spoke of Mr. Lowman as a man of quiet competence, who knew each employee by name. My father said that when Mr. Lowman spoke about a work project, he was as knowledgeable about the technical information as his workers.