Image: Wolfram Burner##Neskowin’s ‘ghost forest’, a series of stumps emerging from the beach sand and waves. The Ghost Forest was submerged when the land below collapsed in the last Cascadia Subduction Zone earthquake in 1700. 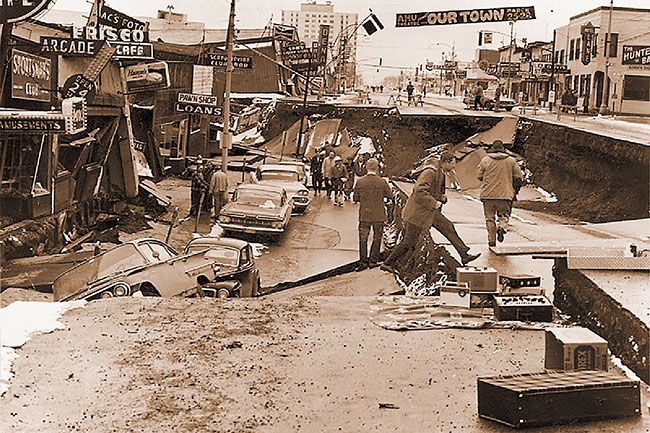 Image: US Army##Damage to Fourth Avenue, Anchorage, Alaska, caused by the Good Friday earthquake. It was the earthquake that spawned the tsunami that killed 136 people, including four in Oregon.

On the evening of March 23, 1964, Seaside resident Margaret Gammon had not slept more than an hour or two when she was awakened by screaming.

It was the community fire siren, blaring non-stop. She looked at the clock. It was 11:30 p.m.

“I lay in bed thinking, ‘Why doesn’t that guy at the fire station take his big thumb off the siren button so we can all go back to sleep and let the firefighters take care of it? fire? recalled later, in an article for Oregon Historical Quarterly. “Within seconds the cars started coming up our street towards the freeway like the devil himself was after them. I thought it must be a huge fire, so I thought I dress up and go watch it.

It didn’t take long for Gammon to realize that it wasn’t a fire. It was a tsunami – and it was almost upon her.

It wasn’t until the next morning that Gammon learned how lucky she had been. Its vicinity was high enough to stay out of the reach of the waves. Others don’t.

“Venice Park, a residential area just north of us and right on Neawanna Creek, was the hardest hit,” she wrote. “Several houses had been completely destroyed by the more than four feet of water that swept over them. It knocked the cars down like matches, leaving them stuck against the houses as the water receded. I noticed hundreds of small fish still alive and squirming frantically in their efforts to get back into the small creek, now within its banks and more than 50 feet from them.Water about two feet deep had washed over Highway 101 at the north of Seaside, at the junction of the Downtown Road and the Southbound Transit Road.

The 1964 tsunami was triggered by a massive event known as the “Good Friday Earthquake” whose epicenter occurred in the ocean a few dozen miles off the coast of Valdez, Alaska. Measuring 9.2 on the Richter scale, the earthquake was the strongest ever recorded on US soil and the second strongest ever recorded anywhere in the world. It rocked Southeast Alaska, including Anchorage, for nearly five minutes.

The quake itself resulted in a surprisingly low death toll: only nine people were killed in it. But the earthquake-triggered tsunami was another story. Near the epicenter, it was up to 220 feet high. It wiped out entire towns and native villages, including Valdez – which, although not completely destroyed, was damaged enough that the inhabitants chose to move and rebuild the whole town further inland on land higher. The tsunami killed a total of 120 people in Alaska.

Along the west coast, the wave heights were smaller, but high enough to be lethal. Twelve people have died in Crescent City, California. In Oregon, Monte and Rita McKenzie and their four children were camping on the beach in a driftwood shelter at Beverly Beach State Park when the tsunami hit. Struggling in the churning waves and flying driftwood, Monte and Rita McKenzie struggled to hold on to their four children, only to have them snatched away and carried out to sea. Louie, Bobby, Ricky and Tammy McKenzie (aged 8, 7, 6 and 3 years old) drowned. They are the only tsunami deaths in Oregon.

But there was a lot of material damage, all along the coast.

In Neskowin, Kathleen Clark got a terrifying view of the entire tsunami cycle from the window of a vacation rental she was staying in with her brother and boyfriend.

Telling the story to Lori Tobias of The Oregonian, Clark said they had the window open and were enjoying the sounds of the waves when suddenly those sounds disappeared. The three young people looked at each other, bewildered, then got up and looked out to sea.

Moonlight shone on a wide expanse of wet sand. The ocean had receded, literally beyond their sight in the moonlight.

“And then, as we watched, there was this wall of water coming towards us,” Clark told Tobias. “Just a straight wall. As if the ocean had become vertical. It was a huge roar coming. The water entered the small yard at the front. We were just flabbergasted, just frozen in place. If the wave had been a foot higher, I bet it would have destroyed the bay window.

In total, the earthquake and tsunami caused $2.8 billion (in 2022 dollars) in damage and killed 136 people. But scientists quickly realized it could have been worse. Much worse.

The majority of the dead from the 1964 tsunami came from communities near the epicenter in Alaska. There, waves hundreds of meters high pounded the beaches within minutes of the earthquake that kicked them up. Most Oregon beaches received a much smaller, more attenuated version of the wave, arriving hours later.

This was not the case in the year 1700, however. That year, the earthquake’s epicenter was just off the Oregon coast, in what we now call the Cascadia Subduction Zone. Waves hundreds of meters high hit the shore within 15 minutes of the earthquake and swept entire villages offshore. And scientists say similar earthquakes happen relatively regularly offshore…on average, every several hundred years. Scientists currently estimate that there is a 37% chance that one will strike within the next 50 years.

With that in mind, Oregon today has two tsunami warning systems: one for distant events that send waves around the world, and the other for larger, more remote local events. murderers. But the best advice is the most intuitive: If the ground is shaking and you’re on the beach, get off as quickly as possible and reach the heights!

(Sources: “Coast Experiences”, an article by Margaret E. Gammon published in the September 1976 issue of the Oregon Historical Quarterly; “Tsunami generated by the Good Friday earthquake devastated the Oregon coast there turns 50”, an article by Lori Tobias published March 24, 2014, in the Portland Oregonian; US Geographical Survey webpage on the 1964 earthquake; Portland Oregonian Archives, 28-29 March 1964)

Finn JD John’s book, “Heroes and Rascals of Old Oregon,” was recently published by Hurricane House Publishers. To contact him or suggest a topic: [email protected] or 541-357-2222.