CHINA has unveiled plans for fearsome nuclear drone torpedoes that would be capable of firing devastating torpedo swarms across the entire Pacific Ocean.

Beijing scientists say the new torpedo could be mass-produced, allowing it to be fired from virtually any warship or submarine.

Chinese news sources boast that the new torpedoes would be an improvement over Russia’s Poseidon underwater nuclear drone, which Putin first displayed in 2018.

The Poseidon has been hailed by the Kremlin as the world’s first nuclear-powered underwater drone.

It is designed to bypass US missile defenses and attack coastal targets by using its cobalt warhead to generate a 300ft radioactive tsunami, according to US military training database ODIN.

In January this year, it was reported that the Belgorod, Vlad’s 600-foot “city killer” nuclear submarine, would be ready for war this year. 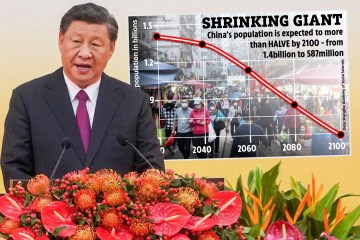 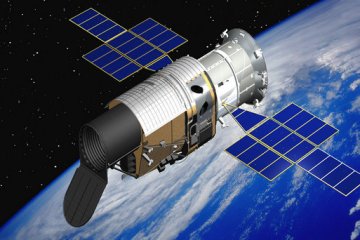 It was hailed as a “game changer” for Putin’s forces when the submarine was first launched in June last year.

However, China claims that, unlike the Russian design, their torpedo will be easier to produce and can be placed in a standard torpedo tube, rather than needing a custom-designed tube.

The unwieldy and expensive Poseidon is too big and overpowered for mass production, notes the South China Morning Post, and its use is restricted as a strategic-level weapon with the Russian special mission submarine Belgorod.

Researchers in Beijing say they have completed the design of its small, low-cost nuclear reactor that would be able to unleash a swarm of torpedoes across the Pacific Ocean in about a week.

Each torpedo would use a disposable nuclear reactor to keep it cruising at over 30 knots (35 mph) for 200 hours before dropping it to the seabed.

A battery would then power a conventional weapon strike, reports Interesting Engineering.

Senior scientist Guo Jian of the China Atomic Energy Institute argued in a paper published this month by the peer-reviewed Journal of Unmanned Undersea Systems that there is a key difference between their design and the Russian “Poseidon”.

“Thanks to its high flexibility and low cost, this unmanned underwater vehicle equipped with the nuclear energy system can be used as a conventional force as a nuclear attack submarine, rather than a nuclear missile. “

The Russian Poseidon has been touted as being capable of flattening an entire city or larger area using its two megaton nuclear weapon – around 100 times more powerful than the bomb dropped on Hiroshima.

But Chinese researchers say such a weapon would spark a nuclear war that would destroy the world, making it unlikely ever to be developed.

Instead, Guo says China’s weapon could be used “for reconnaissance, tracking, attack and strategic strike.”

The low-cost reactor would produce more than 1.4 megawatts of heat from less than 8.8 pounds (4 kg) of low-grade uranium fuel.

That would be enough energy to propel the torpedo across the Pacific Ocean.

“When the manufacturing cost is low enough, even if the nuclear-powered device can only be used once, the overall cost will be low,” the researchers said.

“This, in turn, inspires us to make the system simpler and smaller.”

According to the team, the rector could run for up to 400 hours covering some 10,000 km, roughly the distance between Shanghai and San Francisco.

THE Poseidon nuclear drone that can trigger tsunamis

While crossing the ocean, the reactor would separate from the torpedo and sink to the ocean floor, triggering a safety mechanism to kill the remaining chain reaction.

This, according to the scientists, would prevent any form of nuclear accident from being triggered by the torpedoes.

“Even if the shell is broken, the interior is filled with water and the whole body falls into the wet sand of the seabed, the reactor will not have a critical accident,” they added. “Security is assured.”

However, Asia Times reported that the weapon may never get past a prototype.

Hans Kristensen, director of the nuclear information project at the Federation of American Scientists, said China has been known to follow the lead of the United States and Russia and then leave its designs unbuilt.

While a study last year by the Nautilus Institute found that the Poseidon drone may have only marginal military value despite its devastating capabilities.

Sources told Russian news agency Tass in January that final sea trials are nearly complete and it will be ready by the end of this month.

“The transfer of the Belgorod nuclear submarine to the fleet is scheduled for the summer of 2022,” he reported today.

“It is assumed that this event can be timed to coincide with Russian Navy Day, which will be celebrated on July 31.”