EUR/USD managed to recover some ground after hitting a mid-June low at 1.0358, ending the week a handful of pips above the 1.0500 level. The advance was tepid with sellers continuing to defend the upside around 1.0600.

Over the past two months, earlier concerns about inflation have materialized into fears of recession. Central banks have spent years feeding markets with liquidity and were caught off guard by the pandemic at the start of 2020. The subsequent slowdown in economic activity and the slow return to normal had unexpected effects , whose inflation has become the most notorious.

How did we come here?

The booming economic recovery after the first year of the pandemic has slowed due to supply chain issues. The world machine is too big and too complex to resume its activity in a few months. The slowdown in growth was also an unexpected event. And to top it off, Russia decided to invade Ukraine, while the rest of the world imposed economic sanctions on Moscow and its allies. The economic turmoil is out of control. Politicians and central bankers are well aware of this and are doing what they can, which, by the way, is far from enough to keep the financial boat afloat.

Rising rates will help ease price pressures, but at the same time affect consumption, which will translate into slower economic growth. Recession and stagflation are the new words that dictate market behavior.

Unrelated to the market, people get in the way, but it’s not a priority for policy makers, whatever they may say. Expensive energy, food prices and shortages are reaching worrying levels, and monetary policy measures are doing little to control them.

Additionally, US Federal Reserve Chairman Jerome Powell has been clear about his inability to bring some prices down. Testifying before Congress on monetary policy and the state of the economy, Powell noted that the central bank has little control over energy and food prices, although he reiterated his unconditional commitment to fight against inflation. The head of the central bank finally added that it is “much more difficult” to bring down inflation without impacting the labor market. Nonetheless, the Fed is comfortable with the current pace of rate hikes, and markets are pricing in another 75 basis point move for July, followed by a series of hikes of at least 50 basis points. American policymakers are firmly committed to their aggressive stance.

On the other hand, the European Central Bank is among the most cautious. Most major central banks have pulled the trigger more than once, but the ECB plans to hike rates by 25 basis points in July. Yet European moderation is no better than American aggressiveness. The situation in the Union, due to tensions with Russia and the shortage of energy resources, is set to worsen.

German Economy Minister Robert Habeck has announced that the country will move on to the second stage of its three-stage gas plan in a context of reduced Russian flows. Since the start of the war in Ukraine, fuel shortages have been Europe’s main concern. This particular phase does not mean state intervention, but the country is getting closer to it.

Inflation and growth will remain in the eye of the storm

Against this backdrop, it seems fairly unlikely that the common currency can gain any sustained bullish momentum. The FX board is more of dollar momentum at some point and with some sentiment than factors on the euro side.

From a data perspective, inflation numbers continued to point to price pressures, while growth numbers signaled slowing progress. Germany’s producer price index jumped to 33.6% year-on-year in May, while S&P flash global PMIs pointed to a sharp slowdown in business activity at the end of the second quarter, in the United States and in the EU.

Next week will include some relevant data, which will likely paint the same economic reality. On Monday, the US will release May durable goods orders, up a modest 0.1% m/m. On Wednesday, Germany will release preliminary estimates for June’s consumer price index, while the United States will release the final estimate for first-quarter gross domestic product. Germany will release May retail sales, while the US will then release core PCE inflation figures, and the EU will offer preliminary estimates of June inflation data. Finally, the President of the ECB, Christine Lagarde, will be on the wires throughout the week.

From a technical point of view, the long-term downtrend remains intact. The pair is developing well below a descending trendline from this year’s high at 1.1494, currently around 1.0650. The weekly chart shows the pair trading below all of its moving averages, with the 20 SMA heading firmly south about 300 pips above the current level. Technical indicators, meanwhile, remain in negative levels, but with no clear directional strength.

In the daily chart, the technical readings indicate that the bears remain in control of the EUR/USD. The 20 SMA capped the upside for a second straight week, gaining bearish strength below the longest. Technical indicators, on the other hand, lack directional strength but hold at negative levels.

The pair spent the week in consolidation mode, with sellers lining up around the 1.0600 level. A break above the aforementioned trendline could lead to a correction up towards the price zone of 1.0780, where the pair hit its monthly high in May. The bears will be worried if the pair settles above the latter. 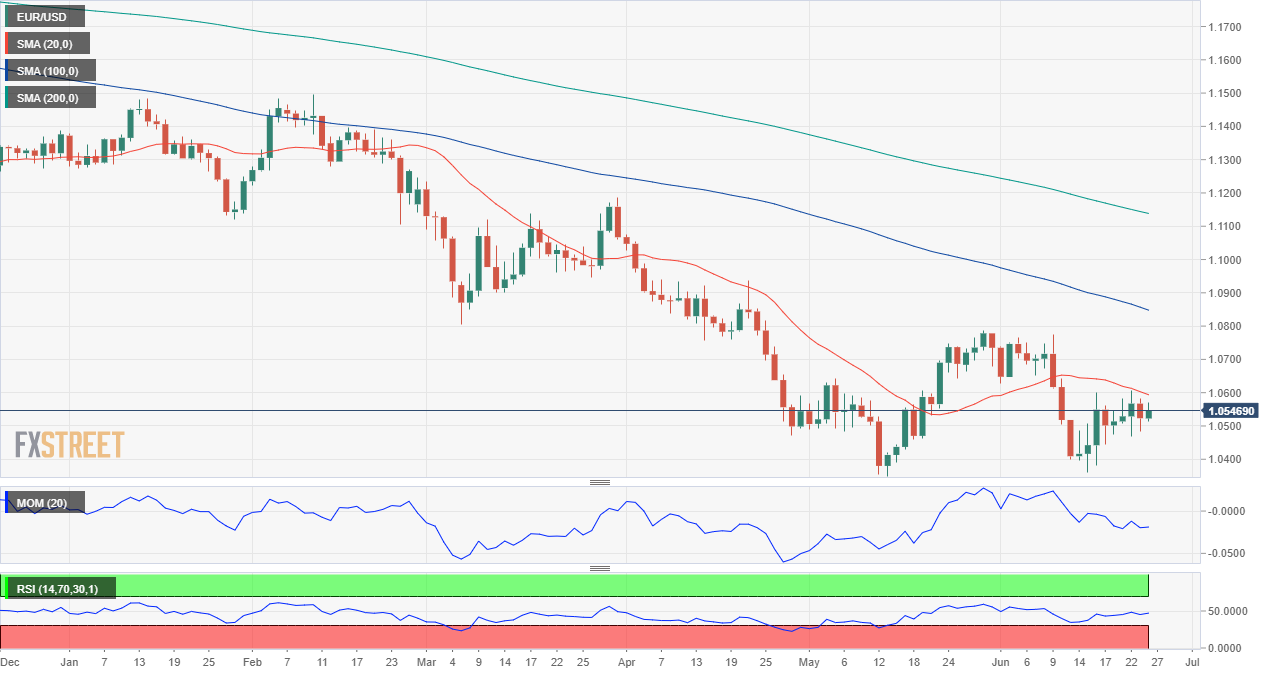 The FXStreet Forecast Survey suggests that the EUR/USD pair will remain under pressure in the short term, although some experts surveyed are speculating on a potential bottom and marginal recovery thereafter. Those betting on a recovery in the monthly and quarterly outlook are narrowly outweighing less than 50%, casting doubt on a firmer recovery.

The overview chart shows that the short-term moving average has risen slightly, although the pair is confined within the 1.0400/600 range. The longer moving averages aim slightly higher, but their strength is limited. What is remarkable is that the number of those who bet for higher levels has increased. Nevertheless, some analysts are still considering a possible approach to parity by the end of the third quarter.