As sanctions creep closer to Russia, the regulatory landscape has become a shifting minefield for fintechs, which now face rising compliance costs and shifting risk considerations.

Dealing with regulatory risk can be difficult at the best of times, but the Russia-type sanctions war is forcing fintech compliance teams “to grapple with complexity itself.”

“Every fintech CEO right now is going to their compliance team to ask how the Ukraine crisis will impact them,” says Charlie Delingpole, founder and CEO of reg-tech firm, ComplyAdvantage.

Companies are coping with the changes in different ways, with some choosing to outsource their expertise to reg-tech companies and others pausing certain services until the situation becomes clearer.

“We’ve had sanctions before – with Crimea in 2014 – so fintechs have the controls and procedures in place,” says Adam Jackson, director of policy at Innovate Finance. “What we didn’t have before was the scale and frequency of updates.”

Digital finance and investment fintech, Dozens, announced last week that it was ‘disabling outbound international payments with immediate effect’ to ensure ‘no money falls into the hands of sanctioned individuals or companies “.

Financial activities covering several counterparties or geographical areas naturally present a higher risk for financial institutions. Dozens’ decision demonstrates the drastic measures that some fintechs must take to protect themselves.

“There are British, European and American sanctions, each has its own set,” Jackson says. “So different businesses, depending on the markets they are in or where they accept payments or provide services, will be covered by several different rules.”

Some fintechs fare better during political upheaval by bringing clarity amid the chaos.

UK compliance data provider ComplyAdvantage says web traffic to its sanctions page has risen from 100 views per week to 4,000 views per week since political action towards Russia escalated. 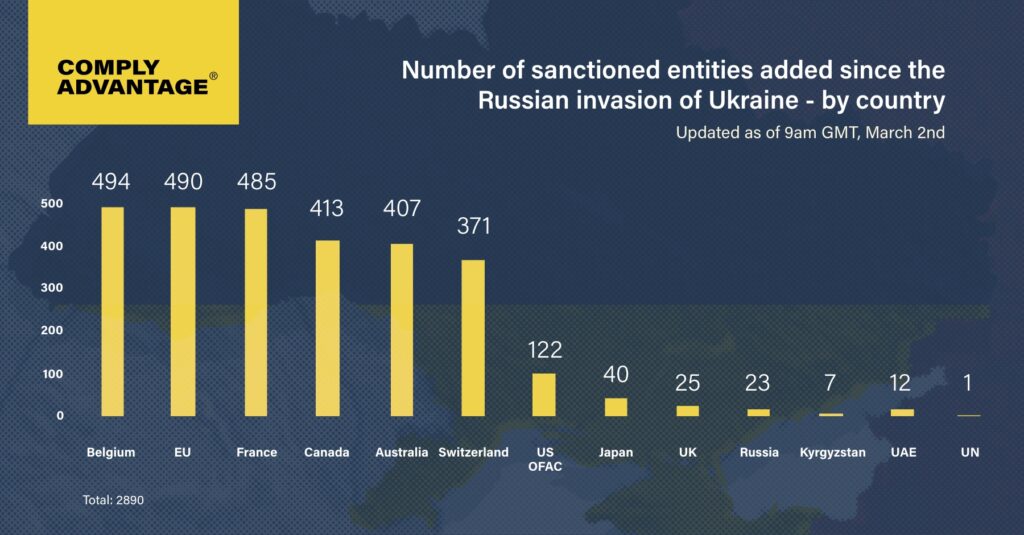 In light of the rapidly changing geopolitical situation, ComplyAdvantage recommended that fintechs undertake an immediate review of systems and controls to ensure screening platforms are equipped to detect and manage relevant risks.

The company also suggests reviewing exhibits for potential red flags and updating training protocols to ensure staff are aware of the latest developments and how to implement them.

Of course, all of this comes at a cost, and it’s also likely to impact the speed and scope of service, at least in the short term.

“There will likely be a slowdown in both onboarding and payments due to additional monitoring companies now having to apply,” Delingpole says. “Compliance costs will only increase – the same systems they used before should be effective, but there is a significantly higher level of entities and businesses they need to monitor for now.”

The investment is worth it. History has shown us that in a rapidly changing and international arena, brimming with new players, companies can be caught out.

US cryptocurrency payment platform, BitPay, was fined $507,375 in 2021 by the Office for Foreign Assets Control (OFAC), for violations of sanctions due to failure to screen customers in real time, at the point of transaction.

Other cases include international payment platform Payoneer, which paid OFAC $1.4 million in 2021 for violating multiple sanctions programs, and TransferGo, which was sanctioned by the Office of implementation of financial sanctions in 2021.

Delingpole compares the regulatory risks facing fintechs in the current environment to the 2014 risk reduction of the UK-Somalia remittance corridor.

“There were a lot of fintechs sending money to Somalia at the time, but with the ongoing problems around Al-Shabab, people were unsure if the money was going to the terrorist group or their relatives” , he said.

“As regulators cracked down on terrorist financing, HSBC reduced its risk and Barclays remained the last bank standing in the region. Most of the money was transferred to fintech companies, 90% of which were eventually wiped out.

In the past, sanctioned individuals or companies have sometimes turned to alternative platforms to move funds, exploiting their global reach or the birth of their market as a means of circumventing sanction measures.

“This is the first major conflict in a developed market where we’ve also had a highly digitized financial infrastructure,” Jackson says. “The world was different in 2014. We have to test resilience and make sure all players think about all angles of penalties.”

Fears are also growing around Russia’s use of cryptocurrencies to support its economy and maintain capital inflows into the country, heightened by the refusal of some crypto platforms to restrict Russian users’ access to their services.

Turning to crypto to evade sanctions is not unprecedented. Shortly after the United States imposed sanctions on Venezuela in 2014, for example, the Venezuelan government launched its own cryptocurrency, Petro, and began transacting digital currencies to access international funding. .

Although the effort had limited success, especially given the system’s susceptibility to fraud and counterfeit Petro transactions, the initiative demonstrated the potential for using digital assets to exploit weaknesses in sanctions regimes. traditional.

“The market is much more diverse now, with a lot of smaller players in the mix,” Jackson says. “Implementing sanctions involves substantial resources and capabilities – so naturally there will be more vulnerabilities among a larger network of companies.”

“The possibility of evading sanctions may be limited, but everyone must commit to closing any loopholes,” he adds. “We ensure that all of our members, no matter how small, maintain their anti-fraud precautions and build cyber resilience.”