Hurricane Roslyn continues to rapidly intensify and is now a major Category 3 hurricane in the Eastern Pacific. The storm is expected to reach the west-central coast of Mexico on Sunday.

Hurricane Roslyn quickly intensified into a major Category 4 hurricane on Saturday and is less than 24 hours away from making landfall along Mexico’s Pacific coast.

At last report, the hurricane had maximum sustained winds of about 130 mph and was about 100 miles west of mainland Mexico.

A Hurricane warning is indeed from Playa Perula north to Escuinapa and includes popular tourist destinations around Puerto Vallarta.

A hurricane warning means that hurricane-force winds (more than 120 km/h) are expected somewhere within the warning zone. A warning is usually issued 36 hours before the first expected occurrence of tropical storm-force winds (over 39 mph).

On the current forecast track, the hurricane is expected to make landfall after sunrise Sunday north of Puerto Vallarta.

The FOX Forecast Center thinks Roslyn should start to weaken before landfall due to upper-level winds and interaction with land, but will still remain a dangerous cyclone through the weekend.

In addition to damaging winds, heavy rain will also be a threat, but due to the storm’s rapid movement, accumulations are not expected to be as significant as they otherwise would be. 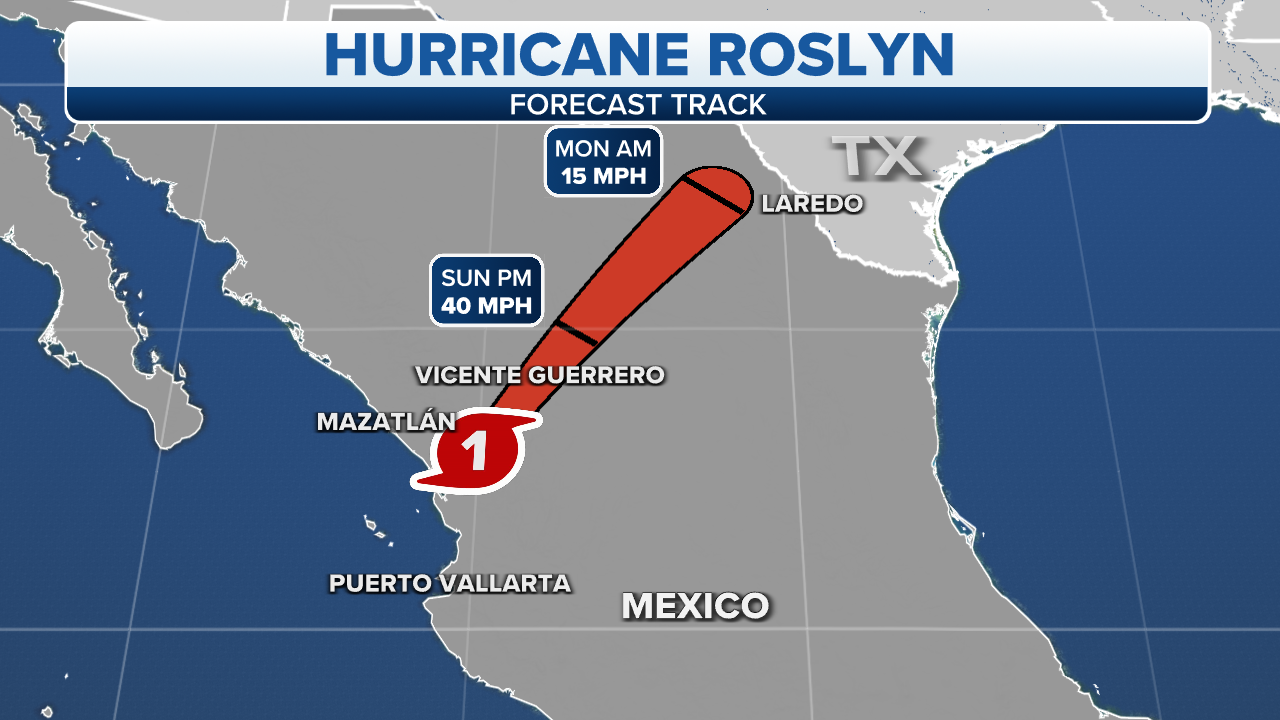 The projected path and intensity of Roslyn.
(FOX Weather)

WHY DO TROPICAL STORMS OR HURRICANE NEVER HIT CALIFORNIA?

The heaviest rains will threaten the upper coast of the Mexican state of Colima, in addition to the states of Jalisco, western Nayarit and southeastern Sinaloa, where 4 to 6 inches of rain are expected. Localized maximum quantities of up to 8 inches are possible in some areas. The states of Guerrero and Michoacán and the lower coast of Colima state are expected to receive 1 to 3 inches of rain.

Precipitation in these locations could lead to flash flooding and possible landslides, especially in areas with rugged terrain.

Roslyn is the 19th named storm of the season in the busy Eastern Pacific.

So far, ten of the named storms have turned into hurricanes, three of which have reached ‘major’ Category 3 status with winds of at least 115 mph.

The Atlantic Basin remains generally calm, with only a minimal chance of tropical cyclone development expected in the next five days.

Hurricane season in the eastern Pacific and Atlantic basins ends on November 30.