A Trinity UMC mission team at work in Mayfield, Ky.

The small town was basically destroyed. Homes were swept from their foundations, businesses crumbled into piles of rubble, and cars were tossed and mutilated into unrecognizable masses of metal. Hundreds of towering trees were snapped and debarked, and numerous power lines were downed, wiping out the ability of the city’s emergency operations center to transmit radio communications.

About 110 people were trapped at the Mayfield Consumer Products candle factory when the tornado passed through that facility, flattening the building to the ground and tossing industrial vehicles. A total of nine employees were killed at the candle factory and several others were injured.

A total of 24 deaths have been confirmed in Mayfield at the hands of the tornado, according to the Graves County coroner, and many more have been injured. The tornado was on the ground for about 200 miles between the Kentucky and Tennessee border, and had a peak wind speed of 190 mph. 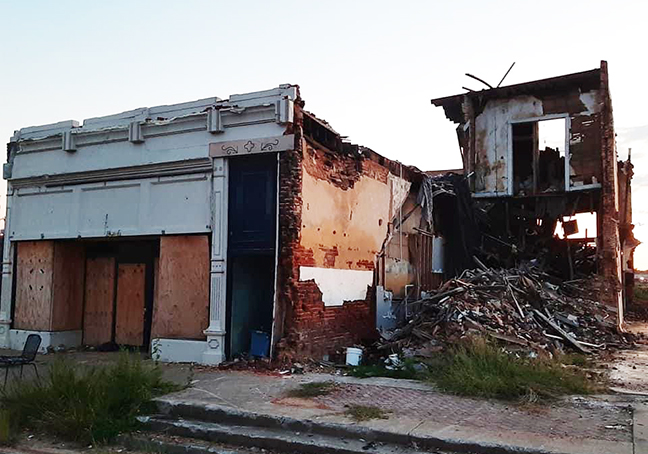 From August 13-20, Sue McFeaters of Susquehanna Township traveled with the UMC Trinity Mission Team from Lickdale, Pennsylvania to Mayfield, where her team partnered with His House Ministries to build homes for the victims. of the tornado.

While there, she worked on three construction sites. At the first site, she finished subflooring, installed walls and trusses, and sheeted the sides and roof of a house.

At the second site, his team of volunteers laid blocks and poured concrete foundations, and at the third site they poured footings.

“We had a rainy day, so we worked in the warehouse, building nine walls for future homes. And…I learned how to use a nail gun! McFeaters joked – a far cry from his tools for office as an admissions counselor at Central Penn College in Summerdale.

While McFeaters worked on homes, townspeople worked alongside his crew to rebuild the town’s water tower, which had been totally flattened by the tornado.

She remembers meeting a man named Forrest, who lost his house in the tornado. Forrest was in bed when the tornado “blew his house up on him and sucked him out of his house”, knocking him three blocks away. He had to wait for someone to find him and then spent three weeks in hospital recovering from his injuries.

“Our team was grateful to have brought a glimpse of hope to this city as they rebuilt and pieced together the pieces of their lives,” McFeaters said.

Helping a candle factory and a city shine again, she remembers the words of Adlai Stevenson, describing Eleanor Roosevelt when she died: “It is better to light a candle than to curse the darkness.

If you like what we do, support our work. Become a friend of TheBurg!