Typhoon Aere was downgraded to an extratropical cyclone after making landfall Tuesday morning in the Kyushu region of southwestern Japan, bringing torrential rains mainly to the west of the country and raising concerns about destabilized conditions across the country. the country until Wednesday, the weather agency said.

The extratropical low pressure system is slowly moving eastward toward the west and center of the country, and the Japan Meteorological Agency is asking people to stay alert for potential landslides and river overflows.

In hot and humid conditions in the area around the cyclone, 200 millimeters of rain are forecast for the western main island of Shikoku and the central Tokai region in the 24 hours until Wednesday noon, and 150 mm for the western region. from Kinki and Kanto-Koshin regions of central and eastern Japan.

In the southern Kyushu region, 100mm is expected to fall, while Hokkaido and the Tohoku region are expected to receive 80mm. The next 24 hours should see 50-100mm of rain in Tokai and Kanto-Koshin. Lightning and hurricanes could also develop, the agency said.

The agency also confirmed the first linear rain bands of the year in Kochi prefecture in western Japan, where more than 50 homes were flooded. Elsewhere in the prefecture, the city of Susaki recorded 85mm of rain in an hour, and the city of Nakatosa saw a major road closed due to landslides.

In Kyushu, the city of Omuta in Fukuoka Prefecture received 85 mm of rain in one hour, with roads in the city, as well as those in Arao in Kumamoto Prefecture, blocked by flooding. Some of Kyushu Railway Co.’s express services have been suspended, and local lines are also experiencing delays.

In the Kinki region of western Japan, Cape Shionomisaki in Wakayama prefecture recorded 46.5mm of rainfall, and an artificial slope near a prefectural road in Kushimoto city also collapsed .

Typhoon Aere weakened into an extratropical low pressure system about three hours after making landfall near Sasebo, Nagasaki Prefecture around 6 a.m. Tuesday. It was the first typhoon of 2022 to make landfall in the Japanese archipelago. 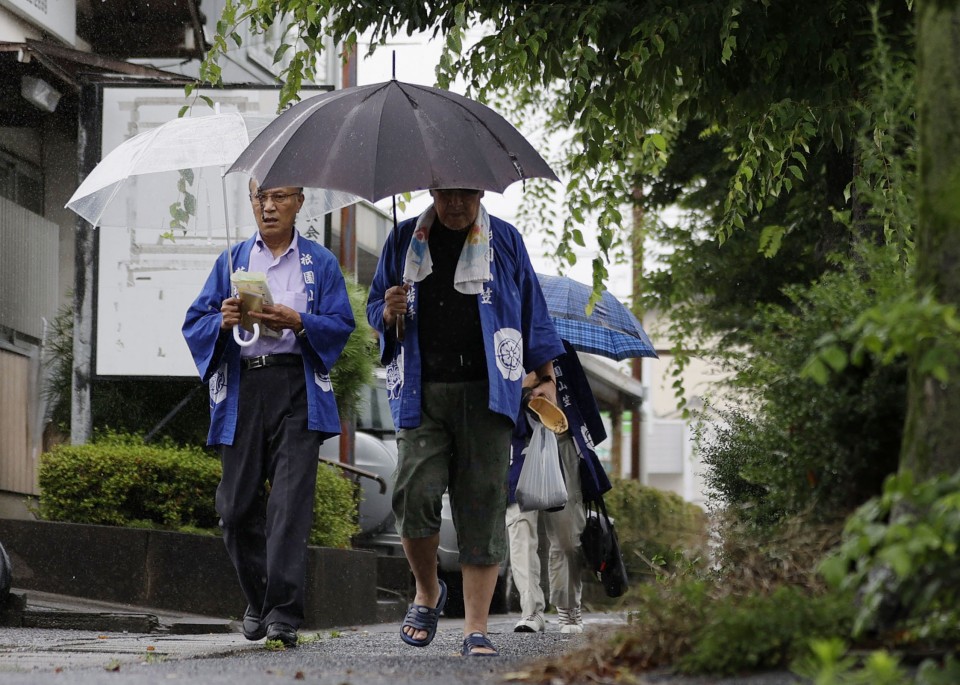 People walk with umbrellas in Asakura in Fukuoka prefecture, southwestern Japan, on July 5, 2022, in the rain brought by Typhoon Aere, which made landfall earlier in the day near the city of Sasebo, Nagasaki Prefecture, Kyushu Region. (Kyōdo) == Kyōdo

Typhoon Aere is expected to make landfall in southwestern Japan on Tuesday.